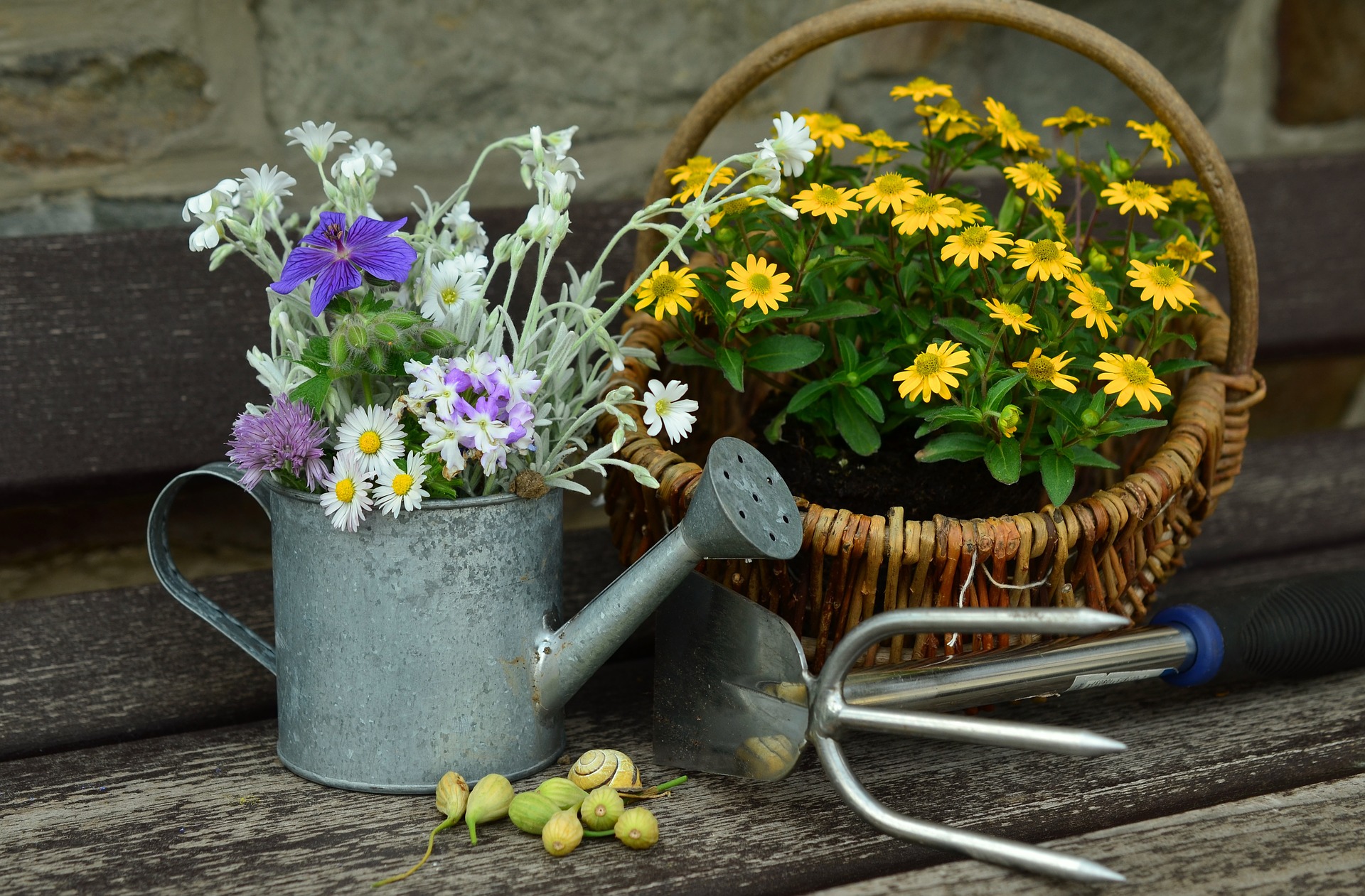 Carpets for the Queen 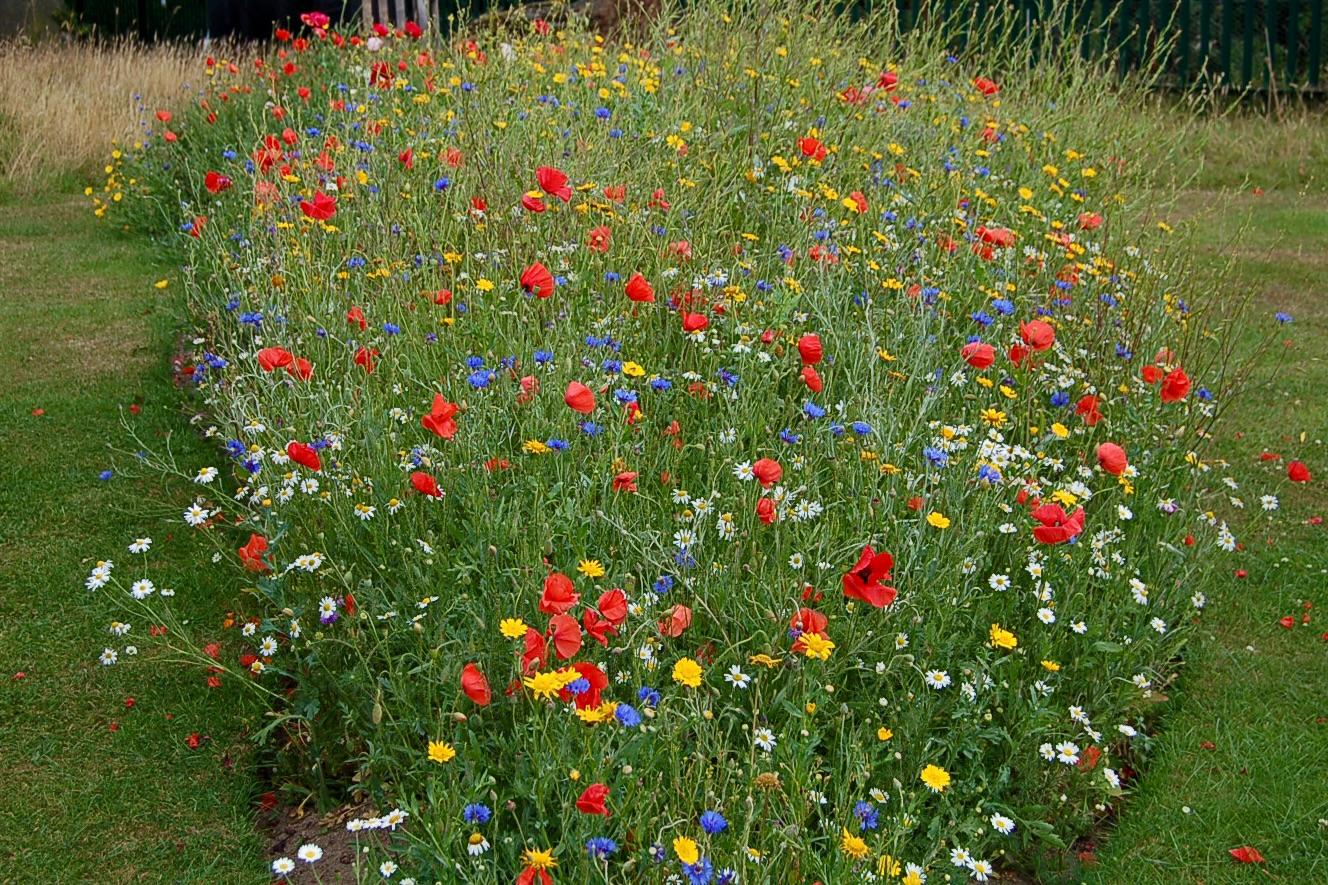 Let’s give our wildlife a helping hand by planting Carpets (of wildflowers) for the Queen.

In this jubilee year, let’s all join together to attract and support bees, butterflies and insects all over Stratford upon Avon.

Several primary schools and nurseries have signed up for the Stratford in Bloom ecosystem schools competition. Those same schools are also going to join in the Queen’s carpet challenge. We still have room for those who haven’t expressed an interest yet, especially senior schools. For more information please contact Sueengland@btconnect.com

This opportunity is open to everyone!!

If you have a grassy patch near you and want to create a ‘Carpet for the Queen’ contact:

Best planted by end of the 1st week of May 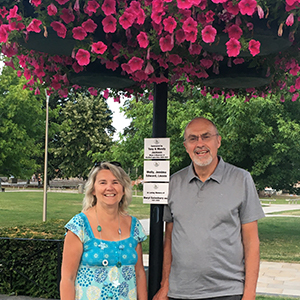 Once again Stratford-upon-Avon in Bloom is offering supporters the opportunity to sponsor one of our hanging basket plaques. You could use a plaque to celebrate a life event, for example, or to remember a loved one, or to mark an anniversary. The choice is yours.

This year’s plaques and hanging baskets will reflect our 2022 colour scheme of red, white and blue, to honour Her Majesty the Queen’s Platinum Jubilee. The hanging baskets will be put up shortly after the end of May (as soon as all danger of frost is past), and the plaques will go up immediately afterwards. The baskets and plaques will be taken down in early October, just before the annual Mop Fair.

This year we have simplified the sponsorship programme: plaques will be for the 2022 season only, and will cost £35 each to sponsor. For more details on how to order and pay for your plaque, and to agree the wording of your inscription, please contact Stratford-upon-Avon in Bloom Deputy Chair, Dr Rosalind Winter, by email at rosalindwinter@btinternet.com

For supporters who sponsored a plaque last year for more than a single season: your plaque will automatically be renewed and put up again this year – you don’t need to do anything! 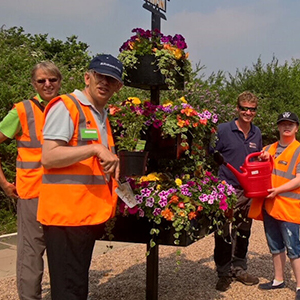 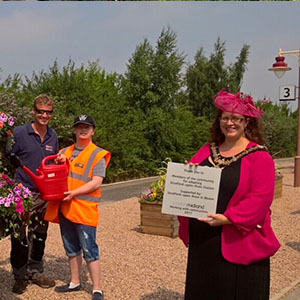 I have always had an ambition to make our station garden as cared for as the Victorian Station Masters seemed to care for their station gardens in the railways hey-day.

I had thought about our platform so often and spoke to several railway enthusiasts in Stratford, but it never quite happened.

The idea came into focus when Brenda Lawrence, London Midland, came to the Town Council in 2016 to talk about plans to upgrade the station buildings. I was a Town Council Representative on the Stratford-in-Bloom Committee, and they were looking for a community project to support. Hey Presto!

I put out a plea on social media for volunteers for FOSS, Friends of Stratford Station, and 4 residents stepped up and we met to lay plans. Avon Services were signed up straight away and they were magnificent. The guys took on watering the planters throughout the first two Summers even though that meant carrying watering cans over the bridge.

The first practical thing to do was to remove the massive cypress trees from the platform garden. London Midland were just fantastic and sent a team to fell and grub up the overgrown trees, cut up old concrete blocks and lay a weed barrier and re gravel the platform.

Next Blenheim Nurseries provided three planters and planted them up. Rosconn were generous in offering sponsorship and Tesco gave bulbs. We were on our way, and all went well for two years. Then came Covid 19 and everything came to a shuddering standstill. We are just getting started again.

The local Rail Passenger Group, known as the Shakespeare Line Promotion Group then stepped forward which led to its Secretary, Fraser Pithie forming the Friends of the Shakespeare Line Community Station Partnership and working miracles by getting all stations between Stratford and Birmingham adopted by volunteers and sponsorship for the whole route from Earlswood Garden and Landscape Centre who have provided 3 more planters for Stratford upon Avon. Forest of Hearts have come on board with help, peat free compost and homegrown plants, all insect friendly.

None of this could have happened without the huge support from the new franchise, West Midlands through the fantastic Dorridge / Stratford Line Manager Ian Taylor supported Fay Easton Head of Stakeholder & Community for West Midlands Railway.

Our latest effort has been to clear the sand box on platform 2 to make a large tree planter for the cherry tree. Jon Knight, a great new volunteer, brought his axe and mattock and beavered away for several days to slowly chip out a mass of roots from the cypress tree removed from here earlier this year. A truly massive job.

None of this would have happened without the fantastic support and enthusiasm from all concerned with the project. Great hopes and plans for next year. 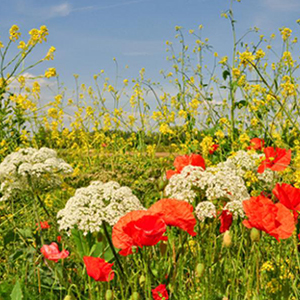 Stratford Town Council agreed a Climate Emergency Motion last year and set up a group to see what could be done to reduce the carbon footprint and enhance biodiversity of the town.

It is apparent that there are many residents in the area who would like to grow wild flowers, and have an abundance of environmental ideas. There are also community groups that may be a little more ambitious, but are unsure of where to start.

The Town Council therefore thought it would be helpful to set up a group, where people can share their ideas, experiences and offer advice. The group has been set up on WhatsApp and is called Stratford Goes Wild.

Rewilding connects people back with nature. It provides many benefits giving people a sense of time and seasonal change.

If you are interested in joining this group of people with shared interests and can chat, seek advice and share your ideas, plus benefit from others experience, please contact Cohl Warren-Howles at Cohl.Warren-Howles@stratford-tc.gov.uk. 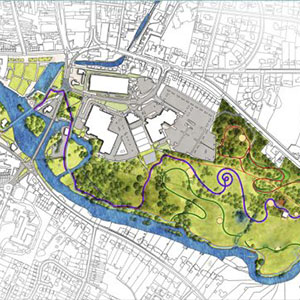 Read about the project on the Stratford Town Trust website link: 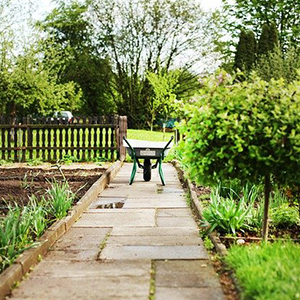 There are three main allotment sites in Stratford, at Shottery, Alveston and Tiddington. These plots provide important growing space for residents and contribute to the network of green spaces throughout the town. Prior to scaling back of our local competition due to the pandemic, our judging team visited the allotment sites each summer - something we hope to resume in the future. For more information about Stratford's allotments, visit: 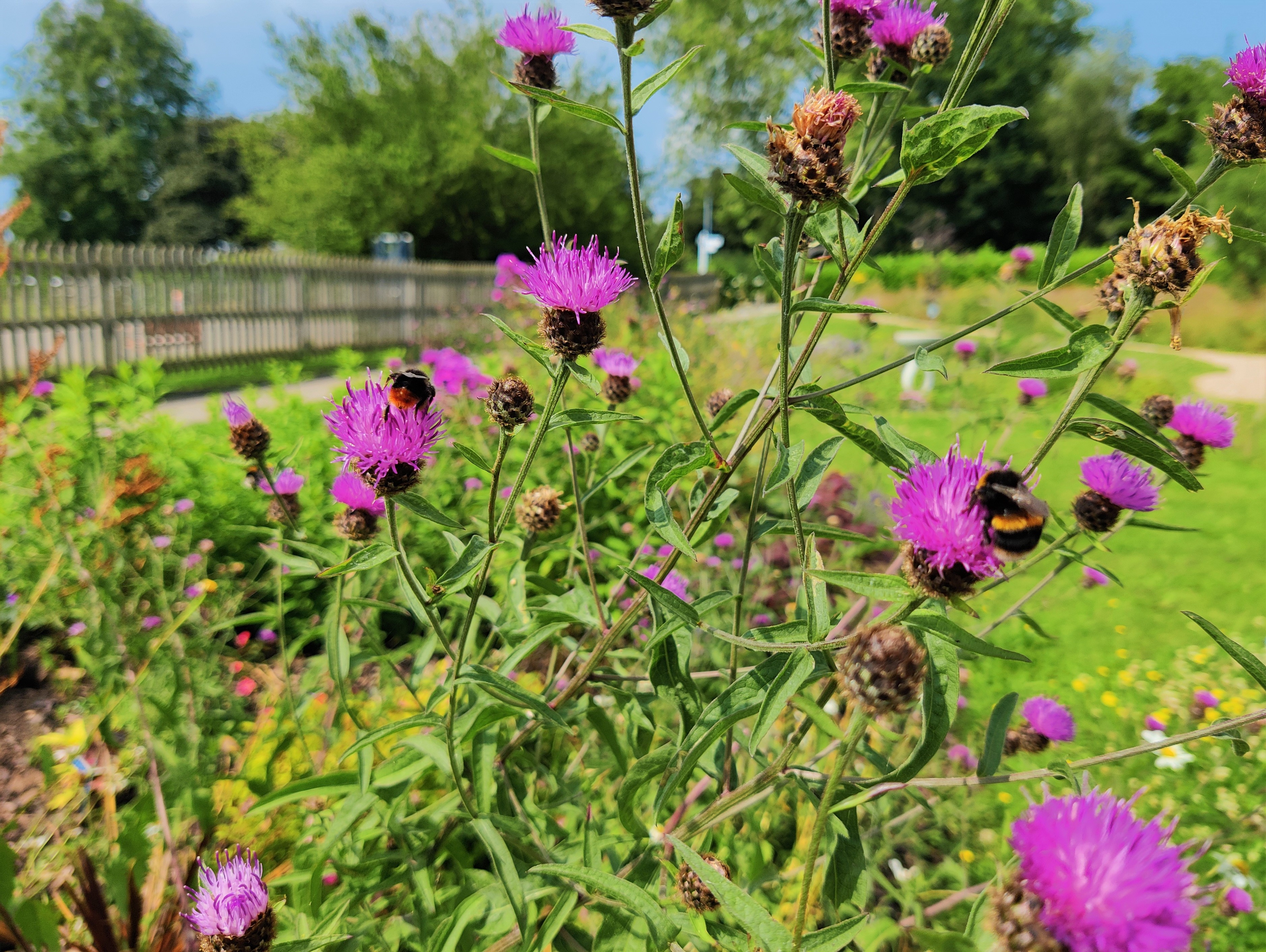 Each spring, Stratford in Bloom contacts all the primary and nursery schools in the town to let them know what our theme is and to invite them to enter our annual schools competition. Previous themes have included: blooms for bees, garden in a wheelbarrow and butterflies.

In 2021, our theme was rewilding and prizes including a selection of wildlife books, identification cards and games were awarded by the Stratford in Bloom committee and local Friends of the Earth group.

Clopton Nursery School:   A wonderful welcome at the entrance with a happy cheerful display of sunflowers. We moved into a pretty semi-circle of taller plants and edible wild strawberries which clearly attracted the children and the wildlife. A great collection insect hotels to attract a wide variety of species.

Caring Kindergartens: A great use of space and a broad variety of wild species. Some edible plants including wild strawberries which were popular with the children! We saw lots of butterflies on our visit and great enthusiasm.

Broad Street Cygnets:   This site welcomed us with brightly coloured wellington boots in an attractive display before we reached a fairly small planting area. They had grown their beans up the supporting structure with insect friendly lavender in front. The centre piece was a delightful up cycled dolls house where each room had been designed for different insects to live in . A brilliant idea everyone could do.

The enthusiasm and joy we saw in all the pupils and teachers was a delight. A big thank you goes to all those who were involved and enthused those around them. We are sure both the environment and the pupils will have benefitted from embracing the Wilding theme.

Thomas Jolyffe School:  A great statement entrance, unexpected but using a large space to combine some conventional planting but lots of varying height grasses and plants. Lots of clever features have been designed in, including an outside classroom and extra wild areas. A good explanatory information board at the entrance was very helpful. Visitors to the school have a delightful walk through this substantial entrance.

Alveston Primary School: The school has embraced re-wilding in all areas. It has used big and quite small areas to facilitate wildlife, e.g. even the small strip by the bicycle racks. Each school classroom had a selection of edible and colourful plants in its designated play area. The upper school area was beautifully decorated with bright pictures. They even sang us a song. The school is also lucky to have a large area given over to a forest school which was a hive of activity for both pupils and wildlife.

Bridgetown primary School: The whole school has embraced the theme of wilding and the collaboration between staff, pupils and ground staff was very obvious. The variation in the heights of grass levels to attract different insects on the edges of the play areas and the school boundaries. A lovely quiet area has been created with seating and vegetable plants using lots of imagination. The development of the extension of Forest school is exciting and will be great to see how it develops. Lots of new areas have been developed from almost nothing.